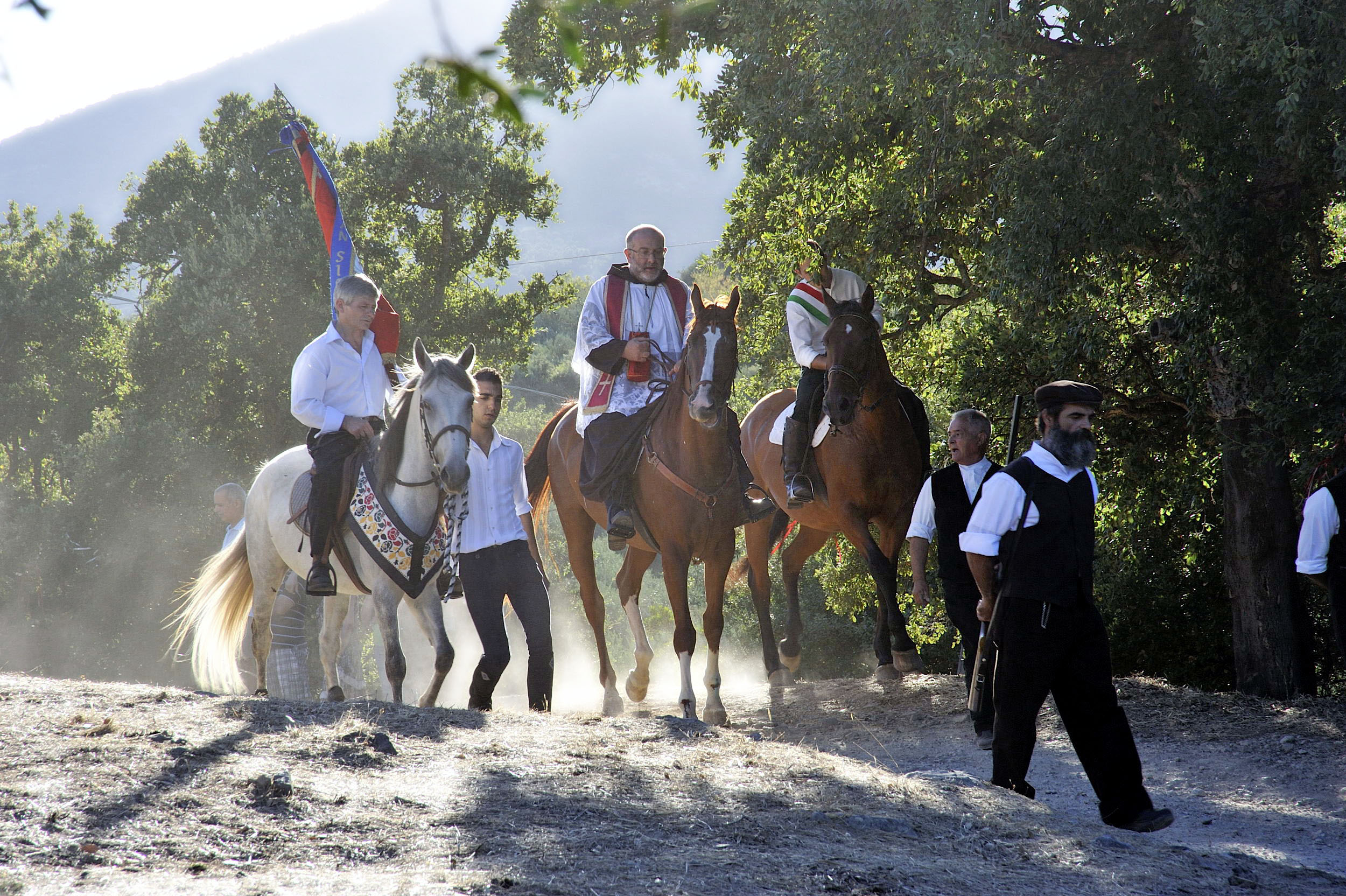 The popular traditions of Villacidro are an integral part of the daily life of the Sardinian people, evidence of the past, some never completely disappeared despite the advance of progress and modernity.

The scenario that distinguishes the town is surrounded by legends and tales of witches, gestures, beliefs and rituals, linked to a predominantly agricultural and pastoral culture.

Sant’Antonio Abate - January
Santu Antoi ‘e su fogu, Saint Anthony of the Fire in a literal sense, is celebrated the weekend that falls closest to 17 January. Tradition dictated that a great bonfire be lit in his honour as a propitiation rite for the fertility of the soil.

Sant’Isidoro - May
Sant’Isidoro (Saint Isidore) is the patron saint of farmers and is honoured the second Sunday of May. The Saint’s image is placed on an ancient cart dragged by majestic oxen that is richly decorated with garlands and flowers and paraded through the town. The “traccas” (oxcarts decorated and adorned with garlands of flowers, coloured drapes and tapestries) accompany them followed by people dressed up in costumes to represent scenes of peasant and domestic life typical of local traditions. There are also many folklore groups from various towns present along with a large number of horses and horsemen.

Festa della Madonna del Carmine - July
The celebration of the Madonna del Carmelo take place in the chiesetta del Carmine chapel immersed in the pine grove of the same name located in the upper portion of the town’s residential area and accompany the evenings in the town for the entire first half of July with processions, torchlight processions and celebrations. The torchlight procession that takes place at dusk of 15 July is particularly evocative: a long parade of lights winds through the hills from the chapel to the residential area and the main piazza.

Festa di San Sisinnio - August
The celebrations in honour of San Sissinnio begin on the Friday before the first Sunday of August, with a solemn procession that accompanies the Saint from the parsonage to the country chapel dedicated to him in San Sisinnio. This recurrence, “sa festa manna”, is the most important and best loved holiday of the local people - and others as well -, thanks to the suggestion of the locations with the grove of olive trees that are thousands of years old, the many legends surrounding the saint, the wealth of colour, music and song.

Santa Barbara – December
This patron saint of Villacidro is celebrated every year on December 4th. A procession that involves the entire town starts off the celebration: groups of people in prayer process during the ceremony and the statue is carried on the shoulders of the “brethren” who chant the “is goggius de Santa Barbara”, hymns of praise in honour of the martyred saint. Horses, horsemen and numerous faithful follow the patron saint every year and share an evening of merrymaking with the desserts offered by the organisation and prepared skilfully by the ladies.

Festa de “Su trigu cottu”  (“Su trigu cottu” Festival) - January
The traditional offer of grano cotto (cooked wheat) seasoned with “sapa” (a reduction of wine must) cannot be missing as a good wish for a happy new year. A hut made out of branches is built in the main piazza. Ladies and gentlemen from the Local Tourist Office volunteer to set up inside and cook the wheat that will later be served in pretty little terra cotta bowls with sapa drizzled on top.

Carnevale delle Bande Musicali  (Carnival of the Musical Bands) - February
During the Carnival festivities, the town streets are filled with pleasant and original musical bands that play funny music while the band members wear funny masks. The music is played out of tune “just for the occasion”.

Vivi Verde (Long live Nature) - Spring
A springtime event that is filled with athletic and cultural events that liven up the weekends, attracting many tourists. Among the activities included on the programme, there are excursions to the mountains, hiking, mountain bike rides, bicycle races, hang-gliding and much more.

Monumenti aperti  (Open monuments) - May
The event that began in 1997 in Cagliari was inaugurated in Villacidro in 2009. It sees the participation of local students, cultural co-operatives, volunteer groups and associations who offer tours of Villacidro’s main historic-artistic and archaeological monuments to visitors.

Notte dei musei  (Free Museum Night) – May
This event was created in France and Villacidro has been a part of the programme since 2005 with the intention of encouraging (above all) a young public to discover museums and the history of local places. It takes place in May and for the occasion museums are open to the public free of charge from sunset to late at night. All town streets are animated with live shows, concerts and cultural activities of various kinds.

Sagra delle ciliegie (Cherry Festival) - June
The first weekend of June is when Villacidro celebrates cherries. This festival goes back a very long way and calls attention to a fruit that is particularly delicious and loved. In the past, many tourists and visitors would happily invade Villascema, the splendid hollow filled with cherry trees in occasion of the festival. The Festival has been hosted in the Parco Comunale (Town Park), located in the residential area, since 2006. It is also possible to sample the delicious fruit here and attend the trade fair of local food farming and handcrafted products and participate in the many events scheduled.

Campionato di Triathlon  (Triathlon Championship) - June
Villacidro has been hosting an important international Triathlon championship every June for the past several years. Participants, fans and the general public attending arrive from 5 different continents.

Settimana della cultura (Week of Culture)
Every spring, Villacidro takes part in the Settimana della Cultura (Week of Culture), an event organised by Italy’s Ministry of Cultural Heritage and Activities, aimed at promoting the area’s cultural heritage. The town’s principal monuments are open to the public free of charge for the occasion and tourists are accompanied and guided through their discovery of local history and resource.